The Point: In the art of a knife fight, two individuals each equipped with a knife circle each other thrusting their weapons at one another. It’s a rudimentary form of face-to-face-combat. And given your odds as a leader, nine times out of ten you’d bet on yourself to be victorious (we’ll give one out of ten to your combatant!) But what if (1) you don’t have a knife, (2) you’re not expecting a fight, and (3) you aren’t facing your competitor… Now the odds have swung completely around and not only are you favored, but defeat is all around you. Sound like your typical office backstabbing incident? In this post, we’ll take a look at how you as a leader can not only fight this unfair fight, but come out victorious in the end in knowing/using to your advantage the five lies of office backstabbing… Enjoy! 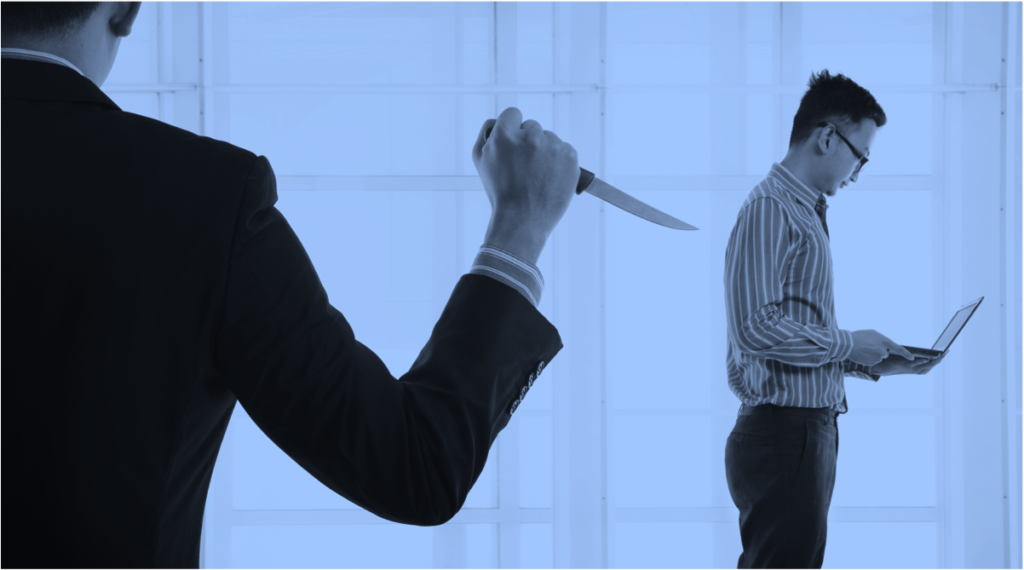 Here’s an interesting leadership challenge to ponder: To say that all is fair in love and war is one thing, but is all fair in the office while at war (Business is war, right?) If business is in fact war, there are two rules you need to keep in mind right from the start when it comes to office backstabbing:

Remember, being a leader is tough work. You “give blood” every day at work, and it’s your career on the line and personal lifestyle that could be sacrificed if unsuccessful. Don’t let anyone tell you that don’t have the right to defend yourself, fight back, or take action. Here then are the 5 lies to watch out for:

Lie #5: You’ll Have Plenty of Time To See Them Coming

In all the executive coaching conversations that I’ve had with clients over the years where the topic of backstabbing was brought up (I’ve worked with 500+ leaders to date), only one of them ever said that he saw it coming. This leader was no less aware of his surroundings, the stakeholders actions that he worked with, nor out of touch with the business at hand. Yet, time after time I heard how they felt completely blindsided by the attack.

Backstabbing Avoidance Tip: Watch your back at all times, and get stakeholders (think of them as the trusted “inner circle”) to watch your back as well!

Lie #4: There’s Going to be a Backstabbing at High Noon

The majority of the executive coaching conversations I heard excuse after excuse regarding backstabbing avoidance being taught in leadership development programs. The problem is that in leadership development programs the scenarios presented were never real. Instead, the backstabbing scenes were like something out of an old Western movie instead of the stealth business streets pounded daily by these leaders.

Backstabbing Avoidance Tip: Your backstabber isn’t watching old Westerns nor are they participating in leadership development scenarios. They are moving like a terrorist and as such act with a high level of randomness.

Most leaders believe that they can get out of any situation that they are put into… Good situations… Bad situations… Either way, the leader believes that they will come out the other end victorious. This is plain stupid and wrong! This lie can usually be heard by leaders when they start the rebuttal with “But…” In all the cases I’ve heard, of the millions of possible options the leader could have taken they always seem to focus on staying and fighting. Remember Dale Carnegie’s advice on winning an argument: The only way to win an argument is to never get into an argument in the first place.

Backstabbing Avoidance Tip: Think back to Rule I above… You need to live to fight another day. Staying and fighting will accomplish little. Running away is your leadership ego perception at work… Think of it instead of taking the high road!

Lie #2: They’re Going to Backstab You in a Certain Way

Think of the typical leadership development office backstabbing case that you’ve explored (You have explored the topic in your leadership development program, right?) What did it consist of? Typically, let’s think of the scenario of a disgruntled worker. Perhaps they’ve been passed over for a promotion, or better yet they don’t want in on the latest program of the month (Change isn’t their thing, you know?) Now you probably know how to handle this type of case with tact and polish… This backstabbing is pretty easy!

However, what if the associate is going stealth? They’re publishing information online about you, the company, and what a joke the whole scenario is. You didn’t cover that one in leadership development did you?

Backstabbing Avoidance Tip: Just as you’d brainstorm solutions to a problem, attempt to brainstorm problems and what your solutions will be. Think of it as a contingency planning exercise.

Lie #1: They’re Going to Listen to Your Logic and Admit They Were Wrong

The leadership fantasy that you’re going to overcome a backstabbing by hearing your assailant out, confirming that you correctly heard what they said, and then attempting to educate them from your perspective will get you nowhere. Avoiding a backstabbing shouldn’t rely purely on opportunity and chance.

Unless your backstabber is a simpleton, the odds of you successfully absorbing the backstabbing, confirming why you’re being stabbed, and then pulling yourself together to have a legitimate debate is very, very slim. The reality is that you cannot safely control the situation. While there may be actions you can take to momentarily delay the backstabbing, unfortunately I typically hear of horror stories where there was simply too much bludgeoning absorbed by the leader to adequately mount a counter offensive.

Backstabbing Avoidance Tip: Throw logic out the window, and think fight or flight… with heavy emphasis on the flight!

In this post we’ve taken a look at two rules to keep in mind when experiencing office politics. We’ve also reviewed five lies that leaders typically have in mind when countering backstabbing. Remember the two rules and you should be able to live to lead another day!