The Point: As a leader, you’re faced with all kinds of challenges… How to increase revenue, keep expenses in check, etc. Global domination is within reach, until… Until your stakeholders that you perceived as previously “with” you turn out to actually be “against” you! In this post, we take a look at passive aggressive stakeholder, why they are the way they are, and what you can do about it to overcome the leadership challenge… Enjoy! 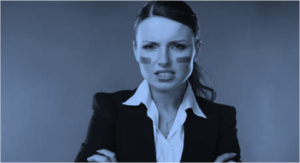 Where Does Passive Aggressive Behavior Come From?

Robin was a team leader in a Fortune 100 organization looking to improve her team’s output (i.e., Sales). While they were the top selling team in the organization, Robin was convinced that in order to stay at their perch, some fine-tuning was in order. Rather than dictate new policies/procedures, she collaborated with her team in presenting problems/opportunities and having them as a whole come up with solutions (That’s a good method, right?)

If you’ve ever been in Robin’s seat you know firsthand that this is no easy task. In executive coaching conversation after executive coaching conversation, I’ve heard a variation of this scenario play out in a variety of industries/organizations over the years. And unfortunately, a side effect of these “we have to do more” moments is when one, or a group, of the stakeholders dissents in a passive aggressive manner.

Passive Aggressive Behavior can be exhibited in any of the following situations:

At the heart of this passive aggressive behavior is commitment (As in lack thereof). When commitments are questioned, typically these stakeholders either shrug it off as a misread on your part, deny that they would ever conduct themselves in this manner, and on the rare occasion boast that they have acted so. One such stakeholder who admitted their passive aggressive behavior proudly proclaimed “You’re wrong. I’m right. What is there to talk about?” Apparently the leadership development program they went to covered such honest moments under the Politically Savvy Transparency section of the program!

So What Can You Do About Passive Aggressive Stakeholders?

If stakeholder behavior is not in alignment with expectations, then the leadership challenge at hand can be dealt with straightforward according to goals established, SMART criteria developed, and/or company policies and procedures. As a last result, however a result that should be concluded quickly, a stakeholder may be released from the organization. Collaboration, harmony, and unity should describe your stakeholders, NOT passive aggressive behavior!

In this post we’ve taken a look at the leadership challenge of how to effectively deal with passive aggressive stakeholders. While passive aggressive behavior can take many shapes and forms, this doesn’t mean that as a leader you should accept it. Establishing expectations, with associated consequences should align the organization and remove this petty (NOT politically savvy) behavior.