The Point: You knew it was coming, but you didn’t want to see it (let alone admit it once it happened!) Be it for purposes of production, professionalism, or personal reasons, firing associates should always be looked upon as a leaders final reproach. A reproach that must take into account the best interests of the individual experiencing the employee firing. So in this post, we’ll explore the leadership challenge of firing and provide 10 tips to allow for leadership success… Enjoy! 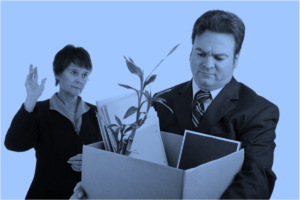 I worked with an organization that had what I would consider tremendous turnover primarily in their sales team. The turnover rate hovered at nearly 300% annually. While a certain amount of “churn” in a sales team can be expected (perhaps even desired?), this level appeared to be excessive.

In speaking with the sales leadership (they did the hiring), they had a process for hiring that was reminiscent of the Wild West! It appeared as though anyone, and I do mean anyone, that entered the hiring funnel that could pass minimal skills tests including fogging a mirror would be offered employment. It was of little or no surprise therefore that turnover was more often than not the result of these poor hiring moments.

“Sam, anyone can fire employees. It takes a real leader to be able to work with people and lead them forward” were the words shared with me by my leader upon assuming leadership responsibilities for the first time. While it’s been nearly 20+ years since I first heard these words, the adage is just as appropriate today as it was then.

But what happens to cause employee dismissal? Is there a specific tipping point that causes irreparable harm to occur for the leader that just isn’t recoverable from? Was it them (the employee getting fired or the leader) that’s to blame? Firing for the sake of firing takes guts, but my experience has seen far too many firings occur because the leader is simply gutless!

Herein are ten tips for firing employees that I’d ask you to consider prior to taking this last ditch effort in the employment lifecycle. Consider them to be ten bases that need to be run out prior to calling the employee out in the game of work:

Perhaps performance is the issue identified for employee dismissal. If so, provide training to the employee so that they know the process they are expected to conduct.

From the “Establish Performance Criteria” above, you have shared what levels employees are expected to perform at. Now it’s time to conduct reviews of said performance to insure compliance with those expectations.

If you are considering firing someone, you’ll want to bring in the human resources and legal professionals. They will assist in insuring that proper organizational and government (state/federal) rules are complied with.

Earlier I said that “You knew it was coming, but you didn’t want to see it (let alone admit it once it happened!)” so insure that those employees being dismissed know in advance that things are not going well and perhaps a parting of the ways might be in everyone’s best interests.

When releasing associates, insure that you are applying consistent expectations as well as firing mechanics… Your HR folks will be glad you did!

If praise is meant for a public forum, this antonym should be conducted in private. If you’ve followed the previous five steps, there shouldn’t be any surprises for any/all involved.

Make certain that you have provided all the process training and tools required to be successful on the job. Establish the difference between able (they understand the job) and willing (they want to perform the job).

How many times have you seen a firing take place, only for a cloud of disturbance to be leveled on the organization on there way out because no one escorted the individual from the organization properly? Odds are if you’ve fired someone in the past, and not escorted them out of the building the cloud blew in badly.

Lastly, and perhaps most importantly, dismiss people in a manner that allows for dignity/pride to be maintained (or at least try). Avoid being mean for mean’s sake.

It’s the job of a leader to lead others. However, some simply aren’t meant to be lead. The best leader I ever worked for employed a 4-sentence dismissal that typically went something like this “Bob I want to talk about you/your affiliation with us here at XYZ Company. You know based on previous conversations that this just doesn’t seem to be a good fit for either of us. As such, we’re going to allow you to go be successful somewhere else. Thank you and best of luck.” When it’s over… It’s over!