The Point: I’ve seen a lot of leaders come, and I’m certain I’ll see a lot go in the future. But what is it about the “best” leaders that we can share with you? The “Best” Leaders one way or the other always have maximum impact on their organizations, their industries, and the world! The following seven (7) part series was developed from coaching conversations at Tip of the Spear and plays an integral part in our Business Advisory Services (Leadership Development, Executive Coaching, and Communication Skills Training for Leaders Series). In Step 1 of 7 for Maximum Impact Leadership we looked at your ability to ask questions. In Step 2 of 7 we looked at your ability to secure feedback from those questions by listening. In Step 3 of 7 we looked at your ability to think of what is being said. Here in Step 4 of 7, we’ll take a look at your ability to thank others for their feedback (Simple, right?) I hope that you’re able to implement these seven (7) “best” practices for maximum impact leadership… Enjoy! 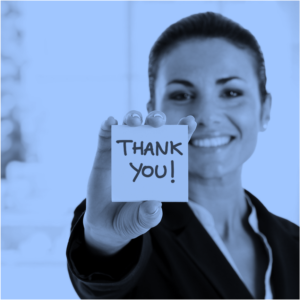 Recall that in Step 1 of 7 of developing your maximum impact leadership, you are asking stakeholders to provide you with feedback on how you can be the “best” leader possible. You’ve asked several key questions that drive towards that destination. In Step 2 of 7 you needed to do the easy part of listening (or difficult part, depending on if you read the post!) In Step 3 of 7 we took a look at ways in which you could “think” differently (or at least this should have been different from your current thinking habits.

How many times have you asked for input on a project, task, or assignment as a leader? Outside of your leadership development training or executive coaching session, I would say the number probably is in the hundreds or thousands (conservatively speaking). Now ask yourself the follow up question: How many times have you actually “thanked” the person providing you with the feedback? Unfortunately, and this is no conservative accident, the number is probably represented by less than the digits on your two hands (That’s less than 10!)

So if you believe that saying “Thank You” is a good representation of manners, why do so few leaders extend the courtesy? I’ve asked this question to well over one hundred leaders, and here are the answers I typically receive:

Killing the Messenger is BAD

Here’s another way to think of the situation of thanking those that provide us with input… How many times have you received such input, and then instead of thanking the other party looked at what was being said in a defensive manner? Odds are, if you’re a leader (or human) your ego got in the way and you became defensive.

Instead of looking at the input received as positive, you instead looked at the message as deconstructive and went on the defense in an attempt to get even.

While killing the messenger is rarely a good strategy, listening to what is said and saying thank you is. It doesn’t mean that you are not planning on taking action at a later time on what was discussed (This should be your strategy, instead of looking to take action against the party delivering the constructive feedback!)

Ask, listen, think, and thank the stakeholders around you for maximum impact leadership. This is just the beginning of the success recipe, and we’ll explore the remainder in the following steps. Don’t forget those messages you heard in your leadership development sessions or executive coaching moments… They just could help you overcome many of the leadership challenges you face!