The Point: If you’re seriously considering a leadership training program for yourself/your organization, you can look forward to spending roughly $50,000 per participant (Need proof? Here’s a link to one of Stanford’s Executive Leadership Development programs). If you’re going to throw-down that kind of investment in an individual, you’re definitely going to want to see solid returns in short order! However, time and again, leadership development program after leadership development program seems to come up short on those success metrics. Worse yet, employees who participate often depart the organization around 25% per year over the next five years. So why does leadership development fail so often? In this blog post, we’ll take a look at what we at Tip of the Spear have identified as the number one (#1) reason… Enjoy! 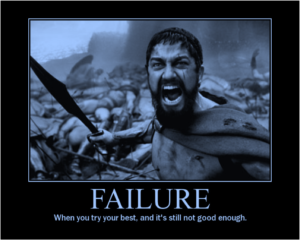 We’re not known at Tip of the Spear for beating around the bush, otherwise we’d be called The Handle Ventures or The Shaft Ventures (neither tested well in our marketing studies!) The number one (#1) reason leadership development fails is the training experience. Back in 2008 I wrote a then (and even now) controversial article that was published in about 100 magazines titled “Should You Fire Your Training Department?” At the time, I sat on the Board of Directors for a Chapter of the American Society of Training & Development (ASTD). With the ASTD’s recent rebranding to The Association for Talent Development (ATD?), I guess even they were trying to get away from the stigma associated with training in the modern business environment!

So What Went Wrong… You Like Training Don’t You?

If you’re like me, you probably attended a training session or two over your career. Believe me, while I was the “odd” one in the room that actually looked forward to the experience (I mean who doesn’t like to learn something new, right?), my peers were typically far from excited. So let’s start at the very beginning and say that Training typically involved people being herded to an event instead of volunteering. The act of having people participate against there will actually turned the events into more of a hostage scenario than a welcomed part of their individual development plan (You have an IDP, don’t you?)

Regardless of hostage/volunteer status of the participants, the only people that sometimes seemed less prepared for the training were the people that were actually instructing the course themselves! Bad visuals (read that as death by PowerPoint) accompanied by lousy presenters only exacerbates the training session. How many times since a training session (go ahead, pick a training session) can you actually recall what was put up on the screen, or what the trainer actually said that was supposed to propel you to a higher state? If you’re like me… and I’ve sat through nearly 1,000+ leadership development sessions, less than a handful of the time. Quite the leadership challenge!

To top things off, I want you to look at your office bookshelf and tell me what you see? If you’re like one of our clients (before they started working with Tip of the Spear obviously), you see a bunch of books/binders from training sessions that are sitting their collecting dust. Now I know when you came back from the training session you had every intention of implementing what you action planned out. However, something happened… You came back from the session, put the books/binders up on the shelf… and business happened! That’s right, you went right back to doing what you’d always done the way you always had. So what did you go to training for again?

When I set out to work with a few organizations back in the late 90’s, I was a little frustrated. I’d worked at a premier consulting firm that produced volumes of solid action plans. However, upon returning to the client organizations to determine implementation success I was often really disappointed. It wasn’t as though all of the wheels had fallen off the implementation vehicle, but at least 1 or 2 had (Read that as 1 or 2 too many!) I knew there had to be a better way, and it presented itself to me one afternoon when one of the participants in a leadership development session asked me if I could coach them… The clouded skies parted and the sun shined down… EUREKA! Just kidding, there was no divine intervention present or maybe there was. I began coaching the individual on implementation/execution/action on the action plan developed during the leadership development program conducted. The results were immediate and powerful! I tested the coaching model over the next year and found this fact: Results from those that experienced executive coaching versus those that did not resulted in 65% better results.

If you’re frustrated with your leadership development training program returning less than desired results, try adding executive coaching on at the conclusion to ensure that you achieve greater implementation/execution/action!

If you’d like more information on Tip of the Spear’s Leadership Development program offerings, including those that incorporate The Leadership Challenge CLICK HERE.