The Point: It’s been said that for a leader, it is a very short fall from success to irrelevance. Nothing fails like success, and as a leader you will find that there is a need to become more humble as you achieve success. However, where the ego crosses over the line of pride is where danger lurks! In this post, we’ll take a look at how as a leader you can achieve success while maintaining humility for both the short and long term time periods… Enjoy! 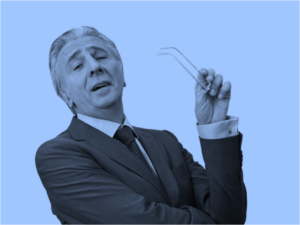 In one of my change consulting engagements, I came across a leader that was pointed towards by organizational team members as the “#1 source of discomfort in the workplace.” Now that’s no small accomplishment, after all in an organization of good size ($50M Annual Revenue and 200 team members), isn’t there a potential bounty of “discomfort” moments that could potentially occur?

Regardless of other moments, my task at hand was to explore “discomfort” validation and most importantly if change could occur in this leader to better the organization. Important bottom line organizational culture lesson to remember here: Once arrogance sets into the individual leader’s mindset, it begins to permeate and pollute the mindset of the entire team and organizational culture.

Is Arrogance an Earned Right?

After completing my assessment of the leader, I confirmed that there were some serious opportunities to better align him with the organization’s mission, vision, and values as displayed by his actions. However, there was one facet of his behavior that I wasn’t convinced would all for a successful change transition: The leader simply put was arrogant.

Arrogance in any setting is never a “depends” on success characteristic. While confidence can at times be an attraction technique, once the threshold of “cockiness” is breached arrogance is the net result. Typically excused as a behavior of “alpha” personalities, competencies that come with the territory of the job, or better yet what our company culture thrives on/in. Our “discomfort” leader acted the way that he did for several reasons, and perhaps the most offensive of them all was because of a self-determined reward system that had him achieving an “earned right” status.

Why You Should Care?

So what’s exactly at stake with the leadership challenge? And considering such toxicity for the leadership challenge, and most importantly why should one care? After all, people that behave outlandish typically achieve more (in less time it should be noted) and reap the rewards available to them for doing so (Think of the movie “Wall Street” for a reference).

If committing as a leader to long-term sustained success is your creed, than arrogance will have no business being on your GPS success route. While these minor (or major) pit-stops or off-ramp ventures seem alluring, they will shortly end up taking more and more of your time. Time that should be spent on the journey which could be spent in much more productive ways. Remember, the race isn’t necessarily won by the fastest/flashiest/most offensive!

In this Leadership Challenge post we’ve taken a look at a leader’s behavior that can transition from humility to arrogance. Once arrogance sets into the individual leader’s mindset, it begins to permeate and pollute the mindset of the entire team and organizational culture. If long-term sustained leadership success is your goal, avoid arrogance and remain humble.