The Point: As the job of a CEO becomes ever more demanding (is that even possible? Yes!), more and more chief executives are willing to receive professional advice and coaching. Executive coaching is no longer considered as a punishment given to incompetent CEOs. Rather, it has now become a trusted form of leadership development (even a sort of status symbol). In the following post, we discuss the benefits that executive coaching offers to C-suite executives (CEOs, CFOs, CIOs, CTOs, CHROs, etc.)… Enjoy! 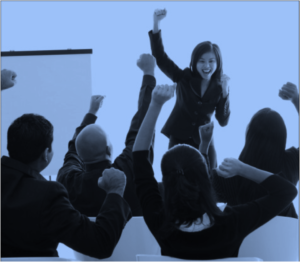 Why a C-Suite Leader May Need Coaching?

On the surface, it doesn’t make sense for a person that has escalated to the C-Suite to go for a coaching session. Don’t they already know everything? Well in actuality, they don’t. Our research at Tip of the Spear reveals that as many as 78% of C-Suite leaders are expressing a willingness to be coached.

This is also the call of modern times. Previously, C-Suite leaders could manage on their own, and executive coaching was considered some sort of remedial action. However, today’s leaders work under so much pressure that they may need essential assistance from time to time. They have everything riding on their shoulders, but at the end of the day, they are just human beings too!

Too much responsibility can easily cause burn out leaders, further complicated by poor decision making. Is it then any wonder that C-Suite leaders are now lasting 7.6 years on a global average down from 9.5 years less than 2 decades ago?

The Cost of Not Being Coached

People who earn themselves the C-suite executive spot have the ability to make sound judgments on a consistent basis. However, all it takes is one wrong decision to lose all of that. That is why, they need someone who keeps the executive on their “toes” so to speak, and in a corporate world marred by office politics, you can’t expect this role to be fulfilled by stakeholders.

And even if stakeholders are asked to give honest feedback about how well the C-Suite leader is running their portion of the company, chances are that communication will not be honest and will withhold negative feedback.

Think this isn’t you? Think of the last decision you made in the C-Suite that didn’t exactly go as planned (Come on, be honest, there had to have been one if not more decisions you made in the last 12-months that just went wrong!) Now take the costs (actual as well as opportunity) associated with that mistake, as well as the revenue (lost or potential not realized). We’re guessing that it’s at least six digits (+$100,000) if you’re honest!

Bottom line: A C-Suite leader needs an unbiased, yet talented and experienced coach to help stay at the top of their game.

To sum up, while C-Suite leaders hold the highest positions in their organization, they are also the ones that need to hear the truth more often. This “truth” delivering role is seldom fulfilled by team members and employees (i.e., Stakeholders). Hence, executive coaching finds its greatest relevance in the upper echelons of the organizational hierarchy.